Get ready to explore the great outdoors and learn about the history and culture of the families who lived between the Tennessee and Cumberland Rivers. The 2018 Heritage Geocaches have been placed and Geocaching.com will be publishing their locations soon!

In order to get everyone ready and excited about this year’s challenge, we’ve put together a post about the heritage locations that we learned about

We placed a geocache box at each site. In each geocache box, there is a sign-in and date logbook and 100 aluminum metal tree tags stamped with numbering specific to that cache location.  The 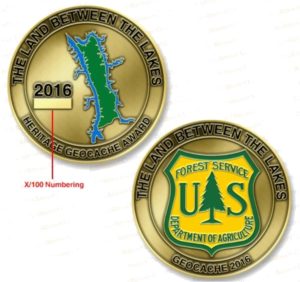 We created an account at Geocaching.com and put out a press release explaining the challenge to the public. We asked them to also register as a member with www.geocaching.com and to log their visits at each of the heritage locations.

The five heritage sites chosen for the inaugural run of the Heritage Geocache Challenge reflect the diversity of the human experience in our area of the country during the historic period. At each of the sites, we installed a “Respect the Resource” sign to remind the public to tread lightly. 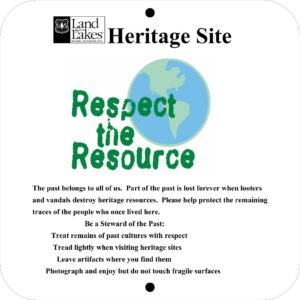 Fulton furnace was built in 1845 and owned by Daniel Hillman and Dr. Thomas T. Watson as part of their Empire Iron Works. In addition to Fulton, the company also operated Center Furnace, Empire Furnace, and the Tennessee Rolling Mill which they had transported piece by piece from where they purchased it in Tennessee to where they reconstructed it along the Cumberland River just two miles west of Fulton.  The furnace stack was thirty-three feet high and eleven feet wide inside at the base.  In a twenty-two week period in 1857, before the furnace was closed, it produced 1,044 tons of iron for the St. Louis and Lower Mississippi River markets.

The trek out to the furnace involved a two mile hike out to the edge of the lake where the furnace remains rest on the shoreline. This geocache was placed in honor of Jim Baccus, a former resident who wanted the public to get out and experience the history of the area.

Kentucky Governor Keen Johnson Birthplace
Governor Keen Johnson, the 45th Governor of Kentucky, was born at this location in 1896 in the Brandon Chapel Methodist Parsonage. He was the son of the Rev. Robert Johnson and Mattie Holloway Johnson. While the parsonage is long gone, the well still remains. This geocache was also placed in honor of Jim Baccus, a former resident who wanted the public to get out and experience the history of the area.

Acree Chimney
The Acree Chimney site is the location of a former home-site overlooking Lake Barkley. Once owned by Lytton G. Acree, a prominent business man in the area, the early-20th Century house is now slowly dissolving back into the landscape. Averaging a 1.5 mile round-trip hike across very hilly terrain, the remote location provides hikers with an interesting look, not only at a beautiful view, but also at the production of the archaeological record.

Joe Jackson was a prominent African-American in the Stewart County, Tennessee, portion of Land Between the Lakes and one of the last African Americans to live in that portion of the County. He is the only person whose name is known that is buried in Jackson Cemetery. The geocache was placed at the former location of the associated African-American church and school, both of which occupied the same building, and are now known as Joe Jackson Church and School.  This geocache was placed in honor of Joe Jackson as well as Lynn and Judy Lancaster; former residents who have worked with the Heritage team to document and preserve the history of the area.

The comments left by the geocachers on the geocaching.com website was one of the most rewarding aspects of this project. It was apparent that they enjoyed being out in the woods and learning the history of the area.

Here are a few of the hundreds of comments left by the visitors:

“This was the most difficult cache we have ever done. As two very overweight individuals, this was down right uncomfortable and intense at times, but we did it! We signed the log & left our signature bugs. Thanks for the challenge and the reminder that anything is possible!”

~ The Bugaboos on Acree

“Thanks for placing these caches and highlighting some of the unique heritage sites in LBL. Can’t wait to see what the next series looks like.”

“A great day of hiking and high adventure with Beekeeper99 as we tackled the LBL Heritage Caches and a few others in the area. The day was filled with great views, creatures of all shapes and sizes, miles of hiking and driving, and the occasional geocacher to say “hello” to. “Thank you, LBL, for setting up this series for us to hunt, enjoy, and bring us closer to the heritage of LBL”. Great journey in and out for this hide. I was glad that my GPSr had some of the terrain aspects still available as it made the hike much easier. TFTC #9035.”

“Beautiful hike. Spent a while just looking around during the hike showing my kids all of the history and neat things. Thanks for putting this one out there and giving us the opportunity to show our kids some really neat things. Took a tag, only 2 more to go. :)”

“Our second of the day and loved the hike to this location. Outstanding history lesson and special cache challenge. To make it interesting we hiked a different way out and did more exploring on this perfect day. Loving this Challenge and the interesting places you have shared. Thanks! ”

“Cool place. Loved the well. Watch that mashed down fence. Almost got me. Signed the log and took the tag. Too cool! I have camped along this road many many times and never knew this was here. As we returned to the car, there was a pair of eagles that came overhead and circles and screeched for several minutes as they apparently had a midair discussion….(I think the wife won. lol) Now, on to the other 4 very soon,!”

The 2016 challenge was such a rewarding success that we have decided to do it again. For this next challenge, we worked more closely with additional former residents in an attempt to include heritage locations that the former residents would like to see highlighted.

The one room log cabin that once stood on this property, now under the waters of Kentucky Lake, housed telegraph equipment for General Ulysses S. Grant while his troops were traveling down the Tennessee River to attack Fort Henry between February 2 and February 5, 1862. Telegraphs were an important new technology utilized by both Union and Confederate troops during the Civil War for better communication and troop coordination. General Grant would go on to become president of the United States between 1868 and 1876.

This was the former residence of the Emberger family who immigrated to Lyon County in the mid 1880’s. They were originally from Germany and were part of a wave of German immigrants to the area who bought land that used to be owned by Mammoth Furnace. The Embergers were influential within the German community and they donated the land that St. Steven’s Catholic Church was built on. The stone walls of the first floor of the Emberger family home are still visible today.

Built in 1924 and originally called Panther Creek Bridge, this bridge is a single-span, pony truss with abutments of poured concrete. Steel stringers and floor beams are used to span the two abutments and support the wooden deck that is the roadway. The bridge originally spanned Panther Creek in the Blue Springs community approximately 10 miles away from its current location, but was moved to storage just before Kentucky Lake was inundated in 1944. At some point between 1951 and 1957 it was moved to the current location over Pryor Creek and served the farming community until the formation of the Land Between the Lakes in 1964.

This cemetery is where the slaves of the Bailey family were buried. The Baileys were a prominent farming family in the Blue Springs community between the rivers and also operated a ferry across the Tennessee River. In 1840 John T. Bailey owned three slaves: a man, woman, and child. They would have helped operated the farm and run the ferry. It is likely that this little family and their relatives and descendants are buried here. None of the graves are marked, but grave depressions are still visible. Periwinkle vines cover and mark the location of this cemetery.

This is the site where the Hillman Company Store for the employees of Empire Furnace once stood. The Hillman Land and Iron Co. owned four iron furnaces between the rivers in the 19th century: Mammoth, Fulton, Center, and Empire furnaces. Each furnace utilized hundreds of workers and slaves to run it. Workers were given special money to be used in the company store run by the Hillman Company and would come to the store to trade in their company money for dry goods and household items. After the iron furnace’s decline, this site became the headquarters for the Kentucky Woodlands National Wildlife Refuge that was in this area from 1938-1964.

When Land Between the Lakes was created in the 1960’s there was resistance from many residents between the rivers. One notable resister was Homer Ray who lived and owned a garage here. In February 1964, Homer Ray along with George Bleidt and Corinne Whitehead helped form an organization called the Tri-County Association for Constitutional Government to oppose the TVA acquisition of land to create Land Between the Lakes. Ray was well-known for the signs posted on his property warning TVA officials to keep away and many of the resistance meetings were held in Homer’s Garage. The place is known as Dead Horse Crossing because on one occasion a man was rushing along the road to the Eddyville Ferry to fetch a doctor when his horse suddenly died at this intersection.

“I have been waiting for this series of caches to come out ever since I did last years one. I was excited to see where you would be taking us this year to hunt. Thank you for the hard work you have done again this year putting this together. Running the backroads of LBL today with the3caballeros. WE made the find and grabbed our tags. Now on to the next one.”

“Working the Heritage LBL geotour with Gnomad51 today. This was our 4th find and the toughest. It took us about an hour and it’s much easier returning to the church than going to the cache. Great work out on this one. We got it! Had lots of fun, got great history lessons, and saw some amazing views. Even saw eagles! Ran into no snakes. Tftc!”

~ TideintheVille on The Emberger House

“Found it! Number 5 of 6. I swear we were gonna give up after the last one. Thanks for making that one a little easier than the last. This challenge is really challenging my family lol. We needed some adventure! Thanks for all your hard work and the beautiful places you have taken us :)” 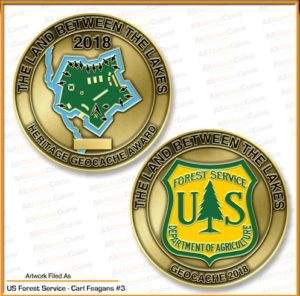 The 2018 Heritage Geocache Challenge will continue to highlight interesting and important locations, commemorating and celebrating the unique and beautiful heritage of the people who lived between the rivers and their families. This year’s geocaches include a school, a quarry, a furnace or two, family farm engineering, and military engineering too.

The Challenge Coins have been ordered, the geocaches have been placed, and once geocaching.com puts them online, we will announce that the Challenge has begun.