May 2, 2014 was a big day for the Woodlands Nature Station. Peeking into the wolf den, the dim morning light barely revealed the two squiggly forms covered in reddish brown fur. With flattened 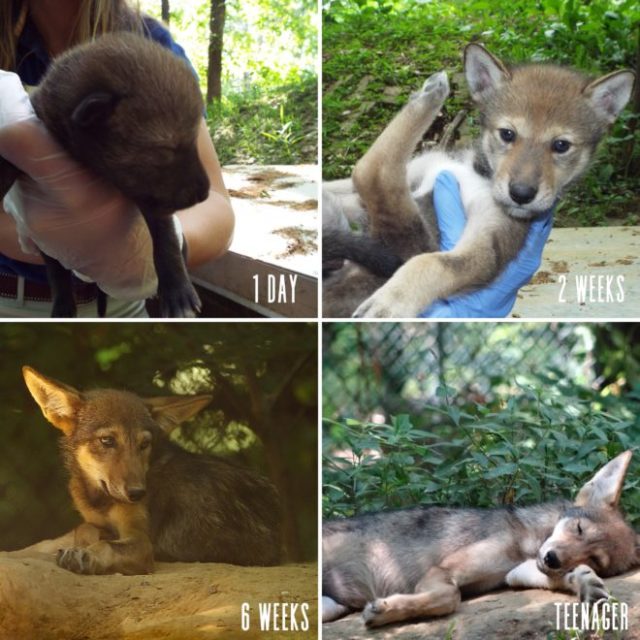 ears, closed eyes, and barely a whimper, the light highlighted their vulnerable faces.  I picked up the larger of the two pups. She weighed ¾ of a pound, her only distinguishing mark being a long white stripe from her tiny chest to her belly.  It was a healthy little red wolf pup! It was the first one born at the Woodlands Nature Station in 20 years.  Attempts in the past did not result in puppies due to the difficulties in the captive breeding of endangered species.  The other pup, a bit smaller in weight, unfortunately had complications in utero and passed away shortly after birth.

Every day, the Nature Station staff checked on the progress and health of the pup, weighing her, checking for injuries, and observing her over all well-being.  Her dutiful parents were not far away, always vigilant in watching as we handled their most prized possession: their only daughter.

At four weeks old, the pup left her den, carefully flanked by both parents. For every step she took, they would match her tiny pace. They never strayed from her more than a few inches.

At six weeks old, solid food became part of her diet. She definitely liked what Mom and Dad were eating!   Nothing more than pointed ears and lanky legs, her awkwardness quickly changed to cunning theft. A quick eye and a swift sharp tug on Dad’s ear would relinquish his prize to a quick dashing pup, running away with a piece of meat almost larger than her!  Giggling and cheering onlookers loved the playful antics as Papa wolf winked and smirked at the crowd with a bit of pride.  The pup was playfully brutal to Papa wolf. No ear, nose or tail went un-pulled, tugged, or pounced on, and all was endured by a very patient and loving parent.  Dad was definitely her favorite play toy. Her tug of war matches turned the once red wolf gray!

After about four months, the pup entered into the equivalent of teenage-hood. Her cuteness turned to awkward and aloof, acting like every other teenager: keeping away from her parents and staying in her bedroom all day.

The Nature Station has been part of a Red Wolf captive breeding program since the early 1990’s.  It is one of 40 other sites that hold, breed, and educate the public about this highly endangered species.

Red wolves once dominated the southern forests from Virginia to Texas, and from Kentucky to Florida.  Truly a southern wolf, the red wolf is completely endemic to the Southern United States. The red wolf most likely died out sometime in the 19th century because of hunting by early settlers. In 1975, a small population of only 14 individuals was found in eastern Texas. They were removed from the wild in order to start an emergency breeding program, which still persists today.

The current population is around 250, with 45-50 released back into the wild. There are only two locations that have wild red wolves: St. Vincent’s Island in Florida, and the Outer Banks of North Carolina. 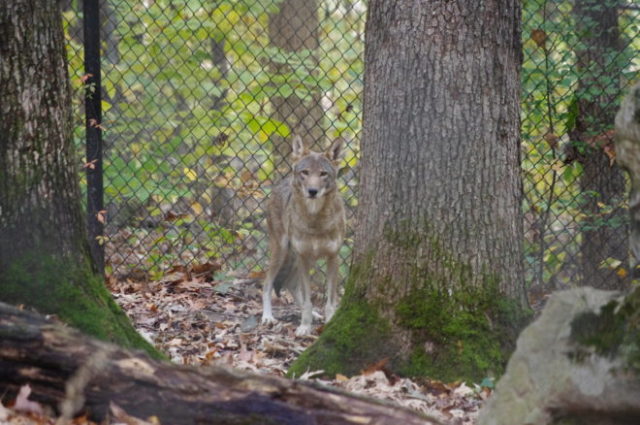 On October 24, we drove the red wolf pup, also known as Red Wolf #2068, to Asheboro, North Carolina to live at the North Carolina Zoo.  She has been chosen to start a new pack, and has been placed with a young male in the hopes of the two breeding this year and starting a family. The red wolf pup is 3 years old, and while still eligible to be released into the Outer Banks until she is 4 years old, she most likely will stay in the breeding program. However, her future pups have a good potential to be released into the wild.  The North Carolina Zoo is often the launching point of red wolf releases into the wild.

On the same day that pup traveled to North Carolina, the Nature Station female wolf was introduced to a new male from Chattanooga’s nature center.  Their relationship, just like in humans, will take some time to develop and bond.  The new wolf, #1736, is a large grayish red wolf weighing over 70 pounds and stands taller than many of the wolves we have had in the past.  He remains shy for the time being, but can be seen throughout the day. The best times for spotting both wolves is right as we open or as the sun starts to set around 4pm.