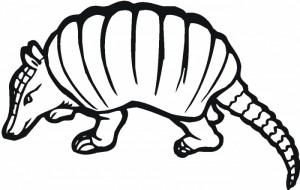 People associate Land Between The Lakes with eagles, pelicans, white-tail deer, turkeys, and now – armadillos.  Our region boasts the largest population of the nine-banded armadillo in the Commonwealth of Kentucky.

So let’s learn about our newest resident:

How did they get here?

Armadillos have been naturally migrating north from two southern populations –Texas and Florida.  Armadillos are native to Texas.  In the late 19th century a resident of Florida introduced a small population into Florida. These two populations later merged and have been marching north ever since.

Rivers and streams do not deter their movements.  Armadillos do not fear water.  Armadillos cross small streams by simply holding their breath and walking along the bottom.  They cross large rivers, like the Tennessee, by inflating their stomach and floating across.

By 1997, armadillos had established themselves in the lower parts of Missouri and Kansas.  At Land Between The Lakes, I saw my first sighting of an armadillo on August 18, 1997 as a young apprentice. I remember my excitement.

Kentucky’s changing climate with warmer winter temperatures allows these poorly adaptable armadillos to stay in their burrows during freezing spells and resurface on our warm days to forage for food.

Are they here to stay?

Yes, armadillos are here to stay in Land Between The Lakes. Visitors and staff have reported seeing them throughout the year, including winter. Visitors have spotted baby armadillos following their mothers on foraging runs.  A number of hard freezing winters that would make survival extremely difficult may be the only thing that will slow armadillos’ natural, northern progression. Kentucky Department of Fish & Wildlife Resources has placed armadillos on their “invasive species” list.

Are they reptiles or mammals?

The armadillo’s armored appearance makes it look reptilian, but this almost hairless animal is a mammal. Armadillos sport fine tracts of hair, are warm blooded, give live births, and feed their young milk. Unique among mammals, armadillos give birth to four identical quadruplets every time.

Armadillos belong to a group of mammals found only in the Americas. A common joke and misconception describes armadillos as “possums in a half shell.”  They’re related to anteaters and sloths while opossums are marsupials, like kangaroos.

Will they dig up my garden?

Definitely, armadillos are diggers! They are built for burrowing with smooth bodies, strong forearms, and large claws. They are not after your tomatoes or petunias; armadillos eat insects. They eat the Japanese beetle grubs under your lawn, the yellow jackets near the old stump, or the termites in the wood pile.

Why do they get hit by cars so much?

The simple answer is — armadillos can’t smell Buicks.  These nocturnal, burrowing animals have a superior sense of smell; yet their eyes and ears are very weak.  Roadways and disturbed areas provide great pathways and hunting grounds for them.

Armadillos also use a very unusual defense behavior when startled – armadillos jump straight up!  This places the frightened creature right at the level of a car’s grille, killing them instantly.

Do they carry leprosy?

A small percentage of armadillos do carry leprosy. This population is located mostly in the Deep South and Florida.  Luckily, modern hygiene and antibiotics provide the best weapons against armadillos transmitting leprosy. According to the Center for Disease Control, the risk is low for catching leprosy from an armadillo.

In Land Between The Lakes, the best time to view armadillos is on warm days in January or February along our back roads.

Editor’s Note: Our Armadillo story is the first of our Friday Education stories we will be bringing to you. If you have a topic you would like to know more about, email [email protected], and we will see what we can do. Thanks for reading! Look for #FridayEducation on Twitter and Facebook.

Find more information on armadillos at: