Soldiers from Alpha Company, 39th Brigade Engineer Battalion came out to the Land Between the Lakes for a very special mission. They helped the Heritage program 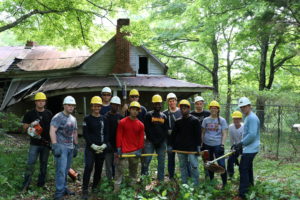 begin a project to safeguard and preserve the house formerly occupied by Cleo Sanford Griffin.

Griffin was a veteran of World War II and, according to locals, may have suffered from PTSD. He was in the Battle of Monte Cassino which began in January 1944 and didn’t end until May of that year. Allied casualties were in excess of 55,000. So it would be understandable if Griffin did, indeed, suffer PTSD as a result.

In the mid-20th century and just after WWII, Post-traumatic stress disorder (PTSD) was often referred to as “shell shock” because of the association with intense and constant bombardment and fighting that soldiers in the two world wars experienced. The result appeared to be a feeling of helplessness expressed through panic attacks, being scared, difficulty sleeping, and so on.

Often those that didn’t experience the same anxieties simply dismissed veterans who did as lacking moral fiber or internal fortitude and these veterans were marginalized by society. Modern understanding of PTSD has come a long way and we now know war and battle aren’t the only causes. Traumatic events like rape or abuse can also trigger symptoms of PTSD.

Cleo Griffin is known by those familiar with the Land Between the Lakes as its last resident. When the Tennessee Valley Authority took over the land between the newly formed lakes (Lake Barkley and Kentucky Lake), they required all the residents—some 2,000 families—to move. TVA purchased the land tracts from many of them and most found new homes in near-by communities. 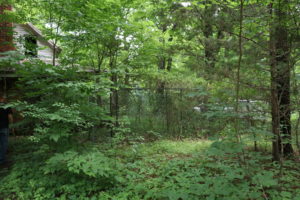 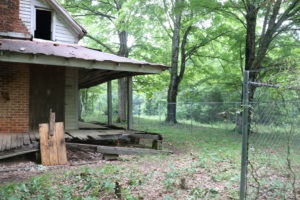 Griffin was originally expected to move into a house in Dover which was situated adjacent to his sister and brother-in-law, but whenever they attempted to move him, Griffin would return to the home he was born in and was once owned by his parents. And he would walk the entire way from Dover to Model, some 15 miles or more.

Griffin’s family would move him again and, again, he would return. Eventually, TVA was perhaps convinced by the Veteran’s Administration in Tennessee to allow him to remain. And so Cleo Griffin remained in his family home. He had no running water, but he had electricity and a phone (the telephone and power pole still stands behind the home). His family brought water once or twice a week in milk jugs so he could have it for drinking. And they would come by, deliver groceries, and cook for him on the weekends.

TVA staff would see him from time to time on his porch or walking down to the old Joe Dill store even though Joe had long moved his establishment off LBL.

Eventually, Griffin became ill and, in 1989, he finally left his family home never to return. He resided in a nursing home until 2000 when he passed away. Today, Cleo Sanford Griffin is interred at Hicks 2 Cemetery, just a few miles from the home he cherished. On his gravestone is a photograph of his funeral procession passing that very home.

As a veteran myself, it was with great pride that we were joined by soldiers from Fort Campbell who volunteered to help us begin a process of preservation for the home of another veteran who is so important to LBL. In just a couple of hours, these young men and women did what would have taken the staff in our department several days! First Lieutenant Farrer, Sergeant Moe, Specialist Cockrell, Private McDaniel, Private Bellino, and the other 10 soldiers of Alpha Company are wonderful representatives of the U.S. Army—the same institution I was a part of too many years ago. 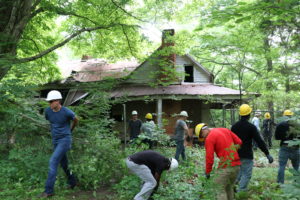 The same institution that Cleo Griffin was a part of even more years before that.

The soldiers of Alpha Company had fun, worked hard, and represented their leaders well. We were able to clear most of the troubling brush and vegetation that was in and around the fence that surrounds the structure. The next steps will be to remove a very large fallen tree from the fence and back yard; repair the fence itself; install a gate that can be secured; cover the doors and windows with fresh plywood; and brace the sagging porch.

Preventing injury to curious visitors who might also disturb or remove artifacts is something we can do now. These steps will also slow the degradation of the structure itself. Beyond this, we hope to have an architectural historian from a university visit soon and offer some recommendations and advice.

In the meantime, the story of Cleo Griffin is one that resonates on many levels. Local descendants of residents and former residents themselves hold him in high regard. And he reminds us all that there is still much to learn and do with regard to Posttraumatic Stress Disorder.

If you think you know someone that is suffering from PTSD, or perhaps you are experiencing it yourself, there are many resources available for both veterans and non-veterans alike:
Contact the Veterans Crisis Line: 1-800-273-8255, press 1.
or
Your family doctor
Your OB/GYN
Social workers
Mental health counselors
Community mental health clinics
Support groups
Private clinics
Psychiatric services at local universities, schools, or hospitals 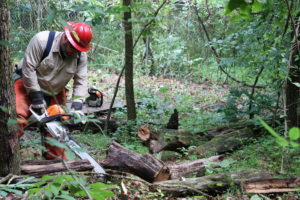 About the author: Carl Feagans is an archaeologist for the Forest Service with a master’s degree in anthropology from the University of Texas at Arlington. He’s a 12-year veteran of the U.S. Army and participated in first Gulf War with the 2nd Armored Division out of Fort Hood.