Some folks seem to forget that the Elk and Bison Prairie is also home to lots of other wildlife.

For example, this was a good morning to see wild turkeys, which happen to be in the mood for their spring breeding season.  This is the time where the male turkeys (gobblers) like to show off 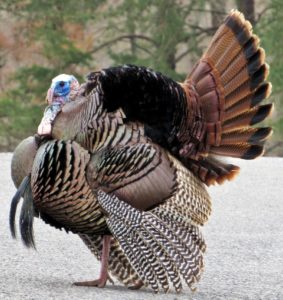 their prowess to the neighborhood females (hens) by fanning out their tail feathers and puffing out their body feathers and ‘strut’ to show off how handsome they are to the hens and how big and mean they look to other competing gobblers… kind of like a crude runway model.

If a male is able to intimidate his competition into backing down, he is more likely to get to breed with the females nearby.  If another male doesn’t back down and the other male feels frisky enough they will fight to see who is dominant, using their size to push their opponent off balance and their spurs to slash.

As a turkey grows, their spurs get longer and their body size can increase, so often the more mature turkeys can win these matches over the younger gents.  Sometimes attitude may be all a male needs to come out on top.

So, back to the story: This morning I was able to witness some of this turkey talk at the Elk and Bison Prairie, and grab a few photos for posterity in the process.  It was a bit cloudy, but you can still see the iridescent coloration in some of their mostly brown body feathers. 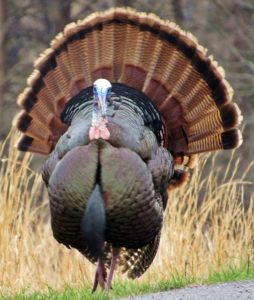 At the 1st site I couldn’t see any hens, but there were 2 nice gobblers strutting their stuff near the 1st audio station.  One used the middle of the road at the crest of the hill to show off, while the other stayed in the grass down the hill for a while.

After some strutting and a little gobbling, the gobbler down the hill decided enough was enough and made a bee line up to confront the gobbler in the road.  When the downhill male got near, the big male turkey 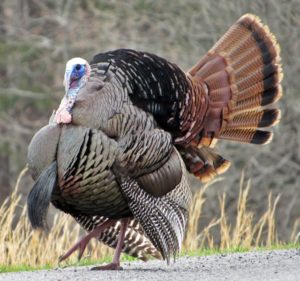 became more chickenly and moved away.  Then the new king of the hilltop… aka ‘king of ‘audio station #1’ started strutting his stuff in the roadway.  After a bit, he decided the other male was too close and chased him further away.

As you may notice, this ‘new’ turkey has a double beard.

Oh, while they were paying laser-like attention to each other, they didn’t seem to notice the hawk that had just perched directly above them to watch and consider which looked tastier for breakfast fare.  Maybe their attitude intimidated the hawk because he decided to just watch for now (they are a bit bigger than him, but he did reposition above them twice, so he was interested).

About half-way around the loop I found another group of turkeys.  This one had a nice, and apparently much smarter male, who was spending his time alone with a bunch of hens.  Without any competition in site he just kept harassing the hens as they tried to feed; puff/strut… sweet talk … puff/strut … sweet talk… repeat.

So, take some extra time in the Prairie to enjoy the other sights and sounds of all the little critters that make the Prairie their home.

PS: NO hunting in the Elk and Bison Prairie!

Article and photos  by: Curtis Fowler, Wildlife Biologist at Land Between the Lakes