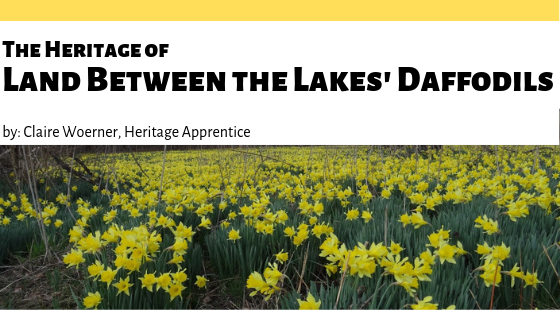 This time of year, the daffodils at Land Between the Lakes are gorgeous and profuse. They seem to pop up everywhere along roads and trails and even some more remote areas. They add color to a landscape just beginning to turn from winter to spring. Many visitors and staff enjoy taking pictures with them or just stopping to enjoy them on a hike or drive. What many visitors never stop to consider about our daffodils, however, is how they got there in the first place.

Daffodils are not native to North America. They, like all Narcissus species originated in the forests of the Mediterranean and have been known since ancient times. The name Narcissus itself is a reference to a Greek myth about a very vain man named Narcissus who turned into a flower after staring at his own reflection in a pool of water for too long. Daffodils have also been found placed in Egyptian tombs. In the 1500’s in the Netherlands, their rise in popularity as a garden flower coincided with the famous Tulip Craze where the prices for tulips in Europe rose so high they created an economic bubble not unlike our Dot Com Bubble.

Daffodils are easily grown from bulbs and can form clumps, allowing them to be divided every few years. They were already a popular garden plant in Europe before the arrival of the Pilgrims in America. Shakespeare wrote about them as did Wordsworth. America’s first daffodils undoubtedly came as cargo on a boat from England and daffodils have been a popular plant in America since early on in its colonial days. Often they were planted in rows along walkways and edging houses. As people moved west, they took their daffodil bulbs with them. They also became a popular mail order item across the country through seed catalogs and are still very popular with gardeners today.

Here at Land Between the Lakes, daffodils were very popular around homes in the 1800’s and 1900’s People planted them in their yards, along their sidewalks and driveways, around churches, and at the graves of their loved ones. Even after the land was bought by TVA and the houses and churches were gone, the daffodils continued to flourish without much care, proliferating where people’s homes used to be. Every place on Land Between the Lakes where you see daffodils they were planted there by a person. If you look around near those daffodils, you might find a set of foundation stones or a hole from an old cistern. You might even find a set of concrete steps. Sometimes the daffodils create almost perfect outlines of squares or rectangles around the location of old buildings. They are a sign that someone once lived there. Here in the Heritage Department, we often document the location of daffodils when we record old homesites and we look for them to help us find those homesites.

In the Land Between the Lakes we have two different varieties that signify different time periods in which they were planted. The most common is the single variety with yellow petals and an orange trumpet known as Southern Jonquils. The second is much rarer but a fun find. It’s the Van Sion daffodil with its double petals that give it a ruffled look. They often have a slightly greenish hue to the petals. The Van Sion variety was more popular in the 1800’s and that’s likely when it was first brought to Land Between the Lakes. These are usually found at older homesites.

Daffodils aren’t the only plants that are signs that humans once lived here. All over Land Between the Lakes there are plants that got there because someone planted them. Yucca is a common sight at homesites at Land Between the Lakes. Its leaf fibers can be made into rope and its roots can be used as soap. Spirea, another spring bloomer, which is a small shrub with plumes of white flowers is also often found at old homesites. Periwinkle is common in old cemeteries and some homesites. There are scattered fruit trees such as apple, peach, and plum which mark the locations of old orchards. Chinese Privet is another plant originally planted by settlers as a hedge but now has become an invasive nuisance. There is even one magnolia tree along a hiking trail in the Fort Henry trails. 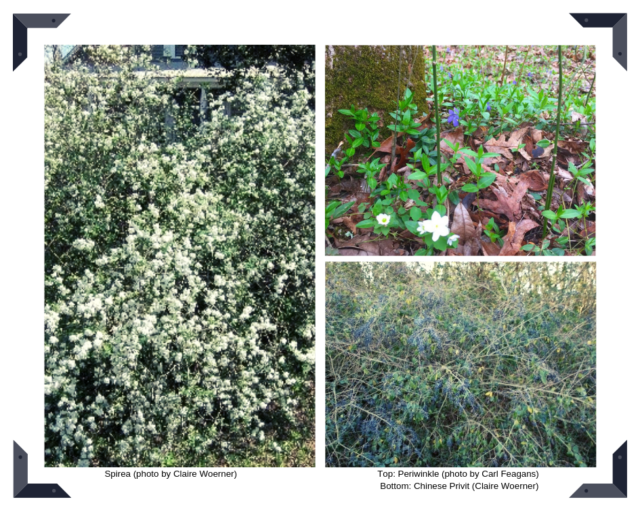 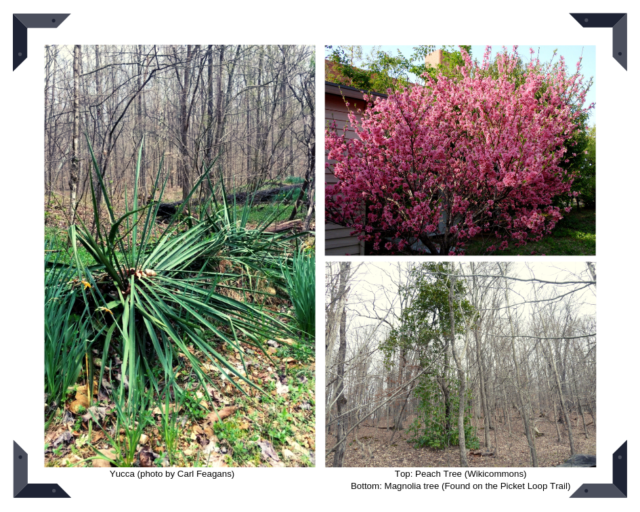 So next time you’re out for a drive or hike in Land Between the Lakes in the spring and you see a clump of daffodils, remember that people and communities that once were here.