Submitted by Jan Bush, Communications Department Manager at Land Between The Lakes

Nate Brelsford, our Twitter friend @theUltinate, sent us a photo asking about a plant he spotted along the North/South Trail. I suspected it was a Yucca plant having recently moved from New Mexico. For more of the story, we went to our Wildlife Biologist Elizabeth Raikes. 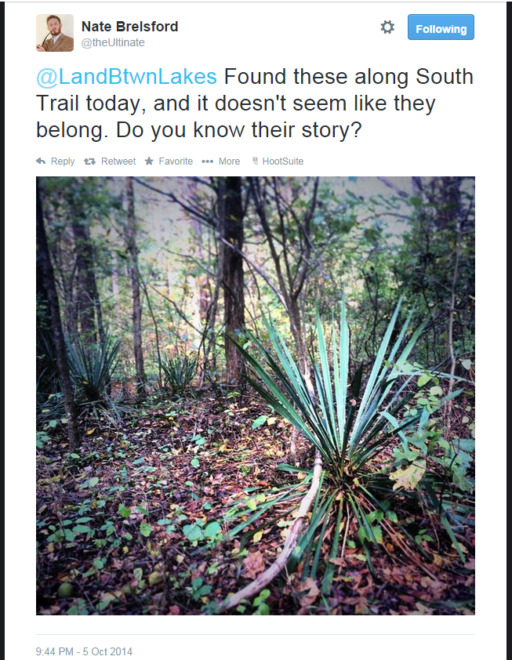 Elizabeth tells us that the Yucca plant is also known as “Beargrass” and officially labeled “Yucca filamentosa.” Yuccas thrive across the Southwest yet can be found sparingly elsewhere in United States.

I remember first encountering Yuccas as a kid riding horses across my cousin’s farm in western Kansas. Much later my folks added Yuccas to their landscaped areas in our yard. In Albuquerque, they grew wild in my zeroscaped yard. Yet I was surprised to see them here in this photo.

Elizabeth explains that at Land Between The Lakes yuccas “can be found in fields, on banks along roads, and around old homesteads. Yuccas have stiff, sharp pointed and fibrous leaves that persist all year long; spread from former plantings; and produce creamy white flowers in June.”

Historically, Elizabeth continues, “Native Americans found many uses for the yucca plant. From the leaf fibers, they made baskets, sandals, ropes, and mats. They utilized the fruit as food and to make drinks. They even ate the flowers from the yucca, which were either boiled or eaten raw. From the stems and roots of the yucca they made soap. Today yucca plants are used as decorative yard foliage and as bordering plants.”

If you have a question or need further explanation about Land Between The Lakes or something you found, give us a shout. Hopefully we can answer your questions.